Jacob is a Member of the University of Michigan Triathlon Team!

1. Do not neglect speed work. Even at the Olympic distance people think of it as such a long event they often completely neglect speed work, which is crucial for (especially in running) keeping good form. Once a week, do a little warm up then head to a track or somewhere with an open space and do 6-8 150-200 all our sprints (about 25-40 second depending on distance and ability). They give your body muscle memory of its most efficient form and help develop speed which you may need to call upon at the that finish line someday!

2. If you’re on a bike trainer during the winter, don’t spend countless hours on a trainer at a steady state. While long rides are still important to accomplish, I find it more appealing to raise intensity and lower volume during the harsh winters I have in my home state of Michigan. That way I’m getting just as good of workouts and don’t get burned out from sitting on a trainer all winter.

3. Have a plan! Even if it’s just to do something every day. That’s still a plan. You’d be surprised how much more you’re committed when you just simply write things down!

4. Don’t look as a bump in the road as a setback. Look for other opportunities within it. Last year I suffered a contusion in my knee, which put me out of cycling and running for nearly 6 weeks. I thought my life was over, but I ended up just concentrating on my swim, which I ended up taking over 3 minutes off my swim time in just those six weeks. With every setback, there’s an opportunity for a comeback. 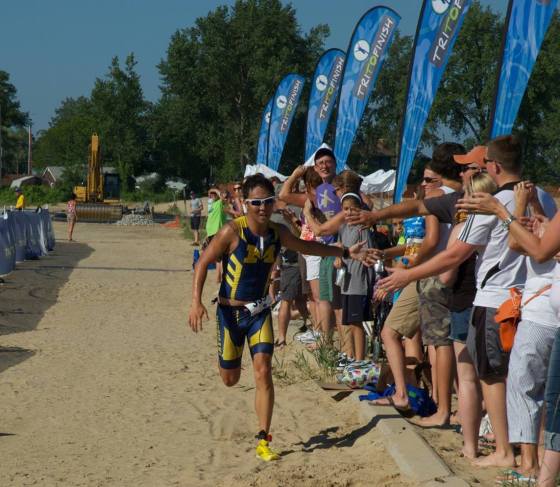 A little bit more about Jacob, from Jacob:

I am junior with Education Major at the University of Michigan. I am excited about being able to give back to a sport that has given so much to me and being able to spread your passion with others who are passionate about identical things. In addition to competing on the University of Michigan triathlon team, I am also an assistant coach at a local high school for the cross country/track teams. I began triathlons two years ago coming from a serious running background. In high school I played ran cross country, track, and played basketball.