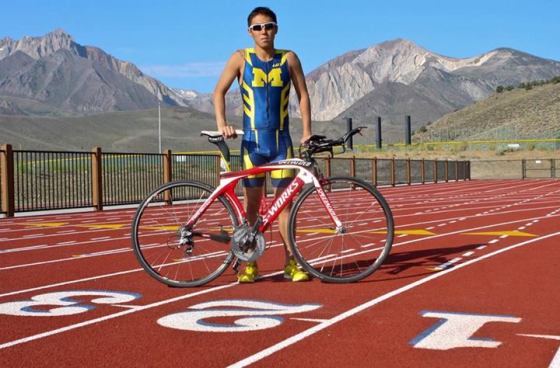 Jacob is a Member of the University of Michigan Triathlon Team!

1. Do not neglect speed work. Even at the Olympic distance people think of it as such a long event they often completely neglect speed work, which is crucial for (especially in running) keeping good form. Once a week, do a little warm up then head to a track or somewhere with an open space and do 6-8 150-200 all our sprints (about 25-40 second depending on distance and ability). They give your body muscle memory of its most efficient form and help develop speed which you may need to call upon at the that finish line someday!

2. If you’re on a bike trainer during the winter, don’t spend countless hours on a trainer at a steady state. While long rides are still important to accomplish, I find it more appealing to raise intensity and lower volume during the harsh winters I have in my home state of Michigan. That way I’m getting just as good of workouts and don’t get burned out from sitting on a trainer all winter.

3. Have a plan! Even if it’s just to do something every day. That’s still a plan. You’d be surprised how much more you’re committed when you just simply write things down!

4. Don’t look as a bump in the road as a setback. Look for other opportunities within it. Last year I suffered a contusion in my knee, which put me out of cycling and running for nearly 6 weeks. I thought my life was over, but I ended up just concentrating on my swim, which I ended up taking over 3 minutes off my swim time in just those six weeks. With every setback, there’s an opportunity for a comeback.

A little bit more about Jacob, from Jacob:

I am junior with Education Major at the University of Michigan. I am excited about being able to give back to a sport that has given so much to me and being able to spread your passion with others who are passionate about identical things. In addition to competing on the University of Michigan triathlon team, I am also an assistant coach at a local high school for the cross country/track teams. I began triathlons two years ago coming from a serious running background. In high school I played ran cross country, track, and played basketball.

In honor of YoungTri’s 3rd anniversary on January 8th, we’re having a contest where members can win autographed Chrissie Wellington YT gear!

To enter, all you have to do is:

For unlimited extra entries (1 point for each friend signed up), sign up your triathlete friends (or friends interested in swim, bike, and run) for YoungTri by clicking here! There is a space to enter your name for member referral when signing up. (So we can keep track of your points!) You can also share the sign-up link with friends.

3 YoungTri Ambassadors from New Jersey (Diana, Olivia, and Brittany) and I met up at Veggie Heaven. It was so much fun! I met Brittany once this summer, but I had never met Olivia or Diana in person!

We ate at Veggie Heaven… it was delicious!

We shared stories about races, spoke about how our breaks had been going, and had a LOT of fun! It was awesome to have the four of us finally connect in person.

The four of us are so excited about what’s ahead for YoungTri… including lots of member meet-ups! We can’t wait for you to join in 🙂

We had to take a group selfie 🙂

Diana is a senior at Marywood University, and plays lacrosse and runs cross country there. She even went to nationals last year. You can learn more about here in the feature “Tri Top 5”. Brittany is a junior at Montclair high school, and loves triathlons and writing. You can read one of the articles she’s written for YoungTri on how to beat post-race blues here! Olivia is a sophomore at West Morris Mendham High School. She loves skiing and triathlons — she did her first race this past spring! Read about her tri beginning in high school — and how it gave her strength — here! 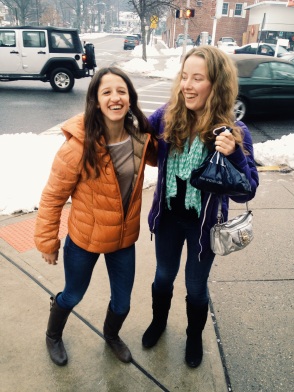 It was SO slippery and icy outside! 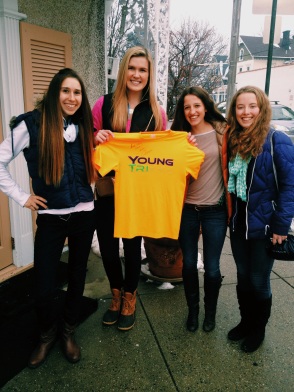 Holdin’ up the Chrissie autographed shirt!

Even though we’re all different ages (and from different parts of the state), we all share one (of many) things in common: we. love. tris. 🙂

We plan on doing races together this summer… and we’ll keep you updated so other members in the area can join in!

Love hanging with other YoungTri ambassadors 🙂

Are you interested in becoming a YoungTri Ambassador? Apply here.

My name is Shelby Edgar from Sherwood Park, Alberta (Canada)  My first love has always been running. I ran track through high school, and now cross country for my University team. My team is currently 4th out of 13 university teams and we are hoping to further climb the ranks this season!

Triathlon came into my life through my mother who is an amazing athlete. In 2009 I watched her complete her first Ironman and I knew that this is what I wanted to do. I am looking to challenge myself in any facet that will lead me to competing with the best triathletes in the world.

My favorite quote is,

“Surround yourself with people who are going to lift you higher.” -Oprah

It is definitely a motivator in training and in life!

I believe that YoungTri provides great insight to a sport that is sometimes difficult to be exposed to, especially for young people. I have big goals for this year, and I hope to inspire and encourage people into the sport that I am so passionate about and live a life beyond their wildest dreams! 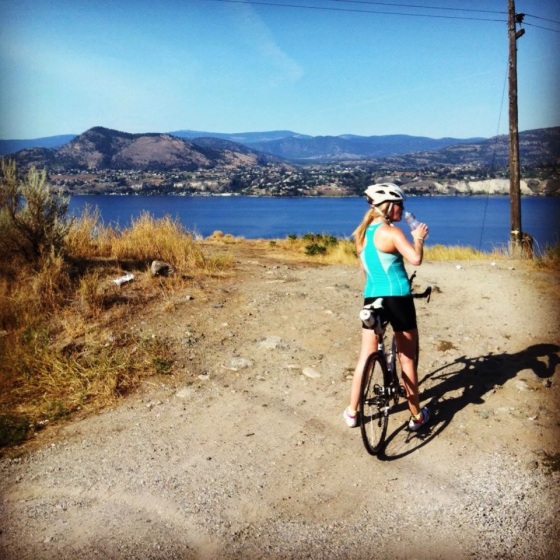 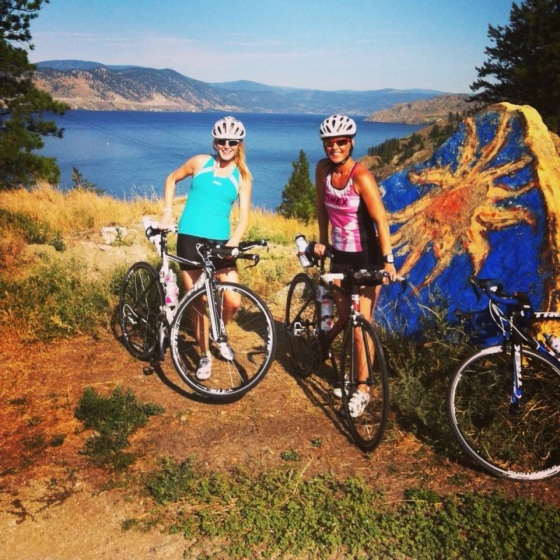 The following is a feature from YT Ambassador Brittany from NJ on her awesome finish this past weekend at the Iron Girl Sandy Hook triathlon!

On Sunday the 8th of September, my dad and I woke up at 3:30am to drive to the Iron Girl Sandy Hook triathlon. Driving down, it was pitch black, and we could not yet see the beautiful scenery surrounding us that we would admire later in the day.

After parking the car, there was about a one mile walk to the transition area. It was a chance to meet other competitors- some of which were about to embark on their first ever triathlon.  They were really nervous as I was when doing my first race. It being my fourth race, I told them what to expect, and they definitely appreciated my guidance and support!

packing for the race!

At 6:45 I started walking to the swim start — about a 10 minute walk. The swim was in the ocean so I was super scared as I had never done an open water swim in the ocean before! Looking at the ages on peoples calves, I spotted some girls my age and introduced myself. It was so much fun to hang out with them before we were off!

We had an in water start, and immediately after getting in, I felt the strong water currents.  I tried to keep calm, and just do my own thing when the horn went off. Throughout the whole swim, I was really scared. There were really rough currents pulling everyone under the water and every which way. The waves were monstrous, and it was hard to sight each buoy. But after getting out of the water, I was within the main pack of my wave!

I had no problem finding my bike in transition, and was quickly on my way to the bike course. I had a great bike leg. Averaging just under 20 mph, I finished in about 31:00. The course was absolutely beautiful. There were 1 or 2 rolling hills, but overall it was a flat course.

I did not have a very fast run per se, but it was solid. I drank a lot of water during the run, which kept me hydrated on that hot day. I finished with a great time overall 395/1141!! I was so proud of myself.

After they all came in, I met up with the new friends I had met earlier at the swim start. We went to the food tent and had yogurt and watermelon. We went and sat together at the awards ceremony area which was set to start in an hour. We cheered others coming in. My dad and grandfather came over and congratulated all of us. I met a woman who had done three Ironman races before and said that this was by far the hardest swim she’s ever done.

Overall, it was a great race and an amazing day. We drove home, and stopped at a diner for food on the way back! Yum!! Just what I needed. I got home and rested up for my first day of junior year the next day. I ended my summer break with a bang!

Now, I am starting to focus on Varsity Tennis Team and schoolwork…. There is always time for training on the weekends!!

Have you ever had a really hard swim? How have your first days back at school been?

Below is an introduction by Nick Patenaude, a YoungTri Ambassador currently living in Victoria, BC, Canada. The YoungTri Ambassador program is comprised of passionate individuals all across the world looking to spread the word about YoungTri, connect other young triathletes, and share their story and their love for triathlons to the growing YoungTri community! If you’re interested in becoming a YoungTri Ambassador, Apply here

My name is Nick Patenaude and I currently live in Victoria, BC, Canada! I’ve been competing in triathlons for just over a year now, as well as duathlons for 3 years. In total, I’ve been running events for about 4 years!

I just qualified (twice) this summer for the 2014 ITU World Duathlon Championships in Pontevedra, Spain, and I’m SUPER pumped to be representing Canada on a world stage! I plan on continuing with my competition in the duathlon scene, and amping up my tri competitions as well, because I want to be at the 2015 World Triathlon Championships! 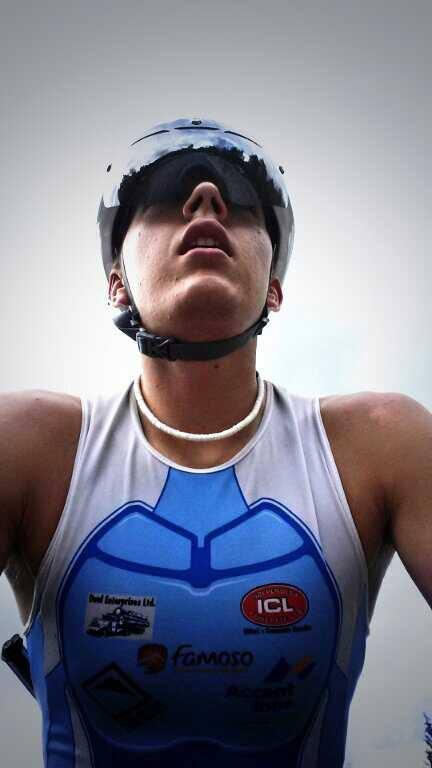 I’ve got lots of swimming to do to prepare for my races! I’m keen to share training tips and advice with other keen triathletes who are looking to become world class athletes, and I’m pretty sure YoungTri is one of the best places to network with like-minded triathletes! The YoungTri Times is always full of health conscious recipes and fun training ideas, and I look forward to adding my own brand of vegan nutrition, holistic training, and educational background to the growing list of Ambassadors!

“Let every minute of training and racing make you happy”

LOVE this quote from YoungTri Ambassador Paloma. Training & racing — although challenging — SHOULD be a source of happiness. 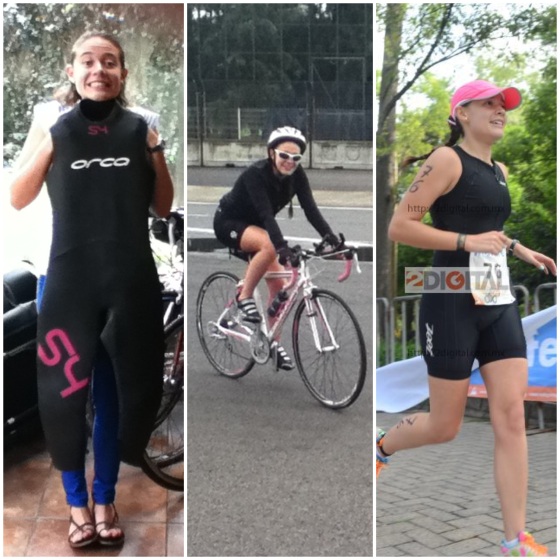 Fun fact about yourself

A fun fact about myself is how emotional and silly I get during training… the good part is that I can stay focused during cycling! So focused, in fact, that I remember during my first triathlon I came out of the water and ran to T1, geared up and hopped on my bike….it wasn’t until T2 and un-clipping my helmet that I realized i still had my goggles on…..OOPS!

Are you a part of a triathlon club? What events do you have coming up?

Im not part of a triathlon club, however i am part of a swimming club. We will be crossing the sea, approximately 35k swimming in teams of 8 and by pairs every 30 minutes to help raise funds for kids cancer research and equipment! We’re all very excited and training hard! The race is two weeks before my Ironman 70.3 in Austin so I’m racing as part of my last long hours training before the big day! 🙂